I know it has been a terrible age since I made a post. That happens to be what moving around to 6 different places in a year will do. Add a few muggle jobs ontop of that and a wizard doesn’t even have time for poetry anymore, nevermind BLOGS! (Oh internet, where would we be without all these extraneous demands on our lives? – oh, probably just stressed out with a lot of carbon copy around I suppose.-) The good news is, I am more than adequately housed and am busy busy busy with poetry over the coming months. 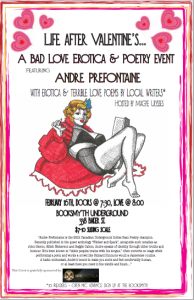 It is Saturday morning and I am spending it with my crying cat, my poems, the internet and Lenny Bruce. Contemplating obscenity, considering being a little more “obscene” and getting prepared to talk this week to the local co-op radio station about an Erotica & Terrible Love poetry event I am hosting here in town and promoting with 2 other local folks.

For the record, and as you may know, Erotica is not really my scene. Truth be told, I often leave erotica events at poetry festivals to go find some folks beatboxing in the alley somewhere and/or doing anything else. I only have a handful of poems one would call “sexy,” and usually cringe when people read graphic sex exploits at poetry nights. So why would I do this!? What crazy part of the universe am I in that I would ask other people to come and share and have me listen to it ALL NIGHT LONG? The answer, is that it is one part test and 3 parts collaborative community building.

Nelson seems like a “wild” place. Seems like an “out-there” expression of what it means to live in the wilds of the west. It is one heavy bottomed point on the flared pants of the patchouli pentagram of the pacific northwest. It is known for marijuana and Shambala and ski bums. But you say EROTICA, and everyone’s so nervous their eyeballs even blush.  Everyone, but a few who have dearly egged me on. An older local told me that in his memory he is pretty sure that an event like this has never happened here. And then I was nervous. I have also been told all the words I still cannot say on air. Tricky times when you are going to talk about erotica… Good thing I am a poet and I have lots of other words for those things.

Last weekend, I ended up watching some of the superbowl in a bar. It fascinates me that no one is ever nervous to attend a football game championship in public. All those men in spandex, all that Beyonce 1/2 time booty, all that booze. What if it got sexy by accident? And then there are mixed martial arts. I know some who do agree that MMA are, indeed, disgusting, but even though they spend half their time with their spandexed crotches pressed up against one another while beating one another into a bloody pulp, who would ever feel they were doing something naughty or experiencing something obscene by watching it? It is fascinating to us as bloodsport and yet, it truly is disgustingly violently obscene. Like, if there weren’t rules, someone would die and be pinned on a stick and paraded around the room at the end of the night. MMA is about death, and football is about war, and no matter how much spandex and muscle is involved, death and war are not obscene in our culture. Sex, however, IS.

Erotica is exciting. I am not interested in graphic sexploits, but I am deeply interested in where people find eros in their lives and how people choose to engage with it in artistic mediums. I am ALSO excited by the other ways we choose to get around saying something graphically explicit and so expanded the event to include Terrible Love poems (by the readers own definition), a sex Q &A with a local sexpert, and invited poet Andre Prefontaine from Calgary to share his dirty little poems as well as his searingly brave ones about identity and humanity. After all, that is pretty much what sex is all about in North America right? If we knew a little more about who we were, maybe we would be less afraid of where we come from and how nasty nasty nasty AND scary it is to talk about it.

So to all you blushers. I will see you on the 16th at the Booksmyth Underground. I, for one, will not be wearing spandex.